The Leslie Rotating Speaker – a holy grail of weird and wacky vintage music gear. This is one of those things that seems to have fallen into a lost ravine of history. I find that most musicians today have never heard of it, let alone seen one. Let’s dive in and explore exactly what this is and hear what it sounds like because… I built one!

Note: Vintage or analog gear IS NOT better than modern, and it doesn’t make you play better. However, it’s imperfect and a little cooky. There are a sea of options with digital plugins, emulators, effects, and programs available that sometimes it’s overwhelming just to start. Having a piece of tangible gear in front of you really narrows down your field of possibility and forces you to get creative with what you have. For me personally, I like playing analog (or vintage) gear because it helps me write and get in the zone.

The rotating speaker (or Leslie) was first innovated by Donald Leslie in the late 1930s. It was originally designed to help an electric organ sound more like an authentic pipe organ. The Leslie was soon adopted by guitarists and swelled to popularity in the 1960s and 1970s with artists like Jimi Hendrix and Pink Floyd using it on their records. Since then, the Leslie has seen a dramatic fall from popularity mostly due to its clunky size and the availability of guitar pedals that can kind of replicate what it sounds like. Vintage Leslie speakers are nearly impossible to find nowadays as they weren’t made with very robust materials. The ones that exist really belong in a museum. If someone sells an original Leslie, it goes for multiple thousands of dollars. Yeah – I can’t afford that.

So What Is It?

The Leslie is a speaker cabinet, usually larger than a medium-sized guitar or bass amplifier. Internally, a molded cardboard baffle (or drum) is suspended over a speaker. This baffle has a chunk missing and is connected to a small motor that allows it to spin. The majority of the baffle blocks sound traveling upwards from the speaker and encourages it to exit the cabinet through the bit that is missing. When the baffle spins, the cavity throws sound around the cabinet and the room. This creates the Doppler Effect – that thing that happens when you hear sirens on the road, and as they get farther from you, it sounds like the pitch goes down and gets distorted. The result is a watery, warbly tremolo-like effect that sounds absolutely psychedelic.

I stumbled upon this amazing DIY article from Premier Guitar when I was searching for a way to build my own Leslie. It is pretty thorough and served as the template for what I did. If you would like to replicate this build, start with this article. I’d say that this project rates as follows:

Note: The article is a great starting point, but don’t get too bogged down with the details. I used it as a loose template and everything worked out great!

Issues that I Had:

Check this part out if you’d like to build your own! Here’s a list of the steps that were problematic and how I would recommend doing this better next time. I’m comparing my experience to the article listed above:

*footnote*: There is a sweet spot with the speed of rotation. There is very little musical difference in the last 15% of the potentiometer sweep (after adding the 200k resistor). It's worth experimenting with 100k or a smaller value. There is also a faint electronic whine that can be heard with the use of the resistors. It is less pronounced with smaller resistance values.

Overall, I’m very pleased with my DIY Leslie Cabinet! Unlike the original vintage models, this does not have any onboard amplification and is only a speaker. My signal chain starts with my guitar, then goes to any effect pedals that I want to use. It then goes to my Fender tube amp, but I bypass the amp’s speakers and send the signal to the Leslie. This means that I get to enjoy the EQ and gain controls of the amp! The Leslie is plugged in, but I can turn it on and off with an onboard switch which is mounted next to the speed control and the input jack. It’s a lot larger than I anticipated, but I’m very glad that I made it because it does sound quite unique.

So How Does It Sound?

I’m surprised by how unique the sound actually is. Many pedals attempt to replicate the sound of the Leslie, but I haven’t heard anything that is absolutely accurate yet. I’m convinced that is because of the way that the cabinet reacts with the room. The natural reverb, echo, and Doppler Effect decay that happens with the air is the secret sauce that can’t be easily replicated in a pedal yet. Granted, I’m not sure that the sound is so unique that it warrants making a big Leslie cabinet. I definitely plan on keeping it and making some cool recordings with it, though!

If you’re looking for a Leslie subsitute, I’d recommend one of my favorite pedals – the Walrus Audio Julia. This one packs a big punch because it includes the “Lag” control which detunes the delayed sound of the guitar. It’s not quite like the Doppler Effect, but it adds that watery shimmer that makes the Leslie so unique.

Here’s a sound recording of my DIY Leslie in action! This is a clean tone with the aforementioned signal chain, no pedals are used. There is also no EQ or mixing applied.

The recording was taken with an SM57 microphone mounted in the room before going straight into my audio interface. My guitar is a double humbucker setup with DiMarzio pickups.

For a cleaner and more usable sound in a mix, I am excited to try recording this in stereo or with several different mics placed throughout the room at different heights. The Leslie causes sound to swirl around you, and this wacky trait is a bit lost in mono.

I hope that you learned something cool about the Leslie Rotating Speaker, and maybe you’ll try to build one someday! Stay tuned (pun intended) for the next Knowledge Blog, and keep on making art! 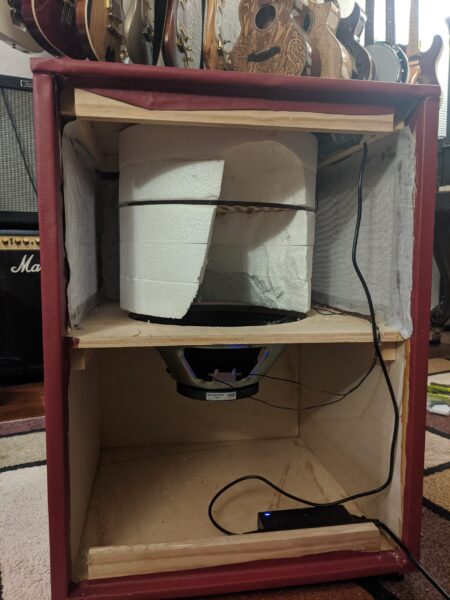